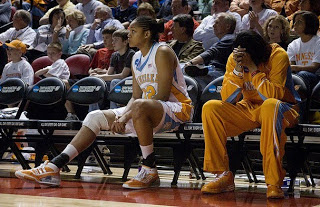 Since her summer calendar is open, Tennessee’s Kamiko Williams plans to fill it with school and basketball.
“I have nothing else to do,” said the 5-foot-11 freshman guard, who said that she will attend both summer school sessions. “Daddy’s leaving. Mamma’s working.”
Williams’ father, Vincent, is a Master Sergeant in the United States Army and begins a tour of duty in Iraq in August.
“I’m used to him leaving; my brother, on the other hand, I don’t think he is,” said Williams, referring to her younger sibling, Keynante. “Since I was in like the sixth grade, he’s always been gone and in high school he was gone for at least a year. So I’m used to it.
“I just wish I was closer to home kind of, so to help my mom out. She gets a lot of stress.”
Regarding her game, everything from improving her conditioning to becoming more proficient with her right hand (her off hand) are on Williams’ agenda. Assistant coach Dean Lockwood wants her to sharpen her offensive moves.
“Being able to do things off one or two explosive dribbles,” he said.
Williams is young enough to still be getting plenty of advice from her teammates. Yet she’s experienced enough to offer her own to next season’s freshmen.
“Get rid of your stubborn ways and buy into the program as soon as possible,” she said. “If not, your life is going to be crappy.”
Nothing’s Free: One of center Kelley Cain’s summer projects figures to be upgrading her 47.1 percent free-throwing shooting.
Lockwood believes it’s a matter of Cain doing countless repetition with a consistent routine.
“Good reps with a system she trusts,” he said. “Get her mind to relax.”
UT coach a.inline_topic:hover { background-color: #EAEAEA; } Pat Summitt also recommended that Cain avoid early foul trouble in games next season or risk losing her starting spot.
“We can’t do that next year,” Summitt said. “No. Not happening.”
Earn Your Minutes: With Vicki Baugh and Faith Dupree on schedule to return next season, there will be more post players vying for playing time. Fellow post Alyssia Brewer thinks those minutes will turn out to be time well spent.
“There were a couple of games this year when one of us really wasn’t doing anything, but we really couldn’t change that because we only had three posts,” she said. “So either you were going to get something or you weren’t.
“Next year, if somebody is not producing, you can put somebody else in and see if they’re going to produce. I think it’s going to be great, and I think it’s going to be a challenge for the posts.”
More On Brewer: Brewer intends to work on a mid-range shooting during the offseason. Summitt doesn’t want her to forget about conditioning.
“I think she’s got to get in better shape,” Summitt said. “I think being a little bit lighter on her feet would make a big difference.”

a.inline_topic:hover { background-color: #EAEAEA; } Pat Summitt hadn’t tossed a Tennessee women’s a.inline_topic:hover { background-color: #EAEAEA; } basketball player from practice in nearly three years.
That changed Monday.
The Lady Vols coach sent freshman Kamiko Williams to the locker room after she exhibited low energy during a workout at Thompson-Boling Arena.
“Hopefully, she’ll learn,” Summitt said. “Again, she’s the most athletic guard on our team.”
The last Lady Vol to be banished was Dominique Redding, who was tossed from a practice leading up to the Women’s Final Four in 2007. Earlier that season, Summitt sent the entire team packing.
After scoring 17 points off the bench in a 60-55 comeback victory at South Carolina on Jan. 31., Williams was promoted to starting point guard. She struggled in her new role against Arkansas on Feb. 4 and versus Vanderbilt on Feb. 8. She went back to a reserve role but wasn’t appreciably better at Ole Miss last Thursday or against Florida on Sunday, where she had two points and two rebounds while playing 11 minutes.
Summitt said she wasn’t sure whether starting Williams was too much too soon for her.
“I don’t know how she thinks,” Summitt said. “If somebody told me ‘Hey, you can be my starting point guard’ I’d be studying my notes, I’d be looking at all our sets.”
Summitt said Williams had watched tape of her recent play with acting assistant Stephanie Glance and acknowledged she wasn’t playing hard enough. Williams also did extra shooting before Monday’s practice.
“Then she comes out and there’s no change,” Summitt said. “Today might have been the lowest energy of all through the whole year. And so I kicked her out.”
Williams, who was visibly upset when leaving the court, was composed when she returned afterward to run at Pratt Pavilion.
“She’s just casual and we can’t be,” Summitt said. “Because, I mean, that’s why I went off at halftime (Sunday). I am committed to holding this team to the highest standard in every practice and everything we do.”
The team is off today. Summitt said Williams’ playing status for Thursday’s game at Alabama will hinge on her effort in Wednesday’s practice.
“Right now I’m just going to wait and see what she does when she gets on the practice floor,” Summitt said.