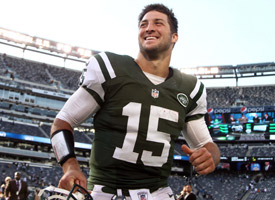 HaHaHa, Tim Tebow to the Patriots!! Yea bet you never thought you would read that. Ah God just keeps showing up! Tim Tebow who seemed to have 1 foot out of the league, signs with one of the major NFL teams in the league, New England Patriots. Read the story.

Way back in April, the Patriots were atop our list of potential Tebow landing spots because of Belichick’s appreciation of versatile players and his love of all things University of Florida. But this news still comes as a surprise because of the timing.
Yahoo! Sports reported last month that there was “no chance” the Patriots would sign him. Belichick came out publicly and lambasted the accuracy for that report last week.
So why would Belichick sign Tebow?
Because he can.It really might not get more complicated than that. Former Denver Broncos coach Josh McDaniels remains on the Patriots staff and is obviously a big believer in Tebow. There is virtually no risk to the signing because Tebow’s contract is unlikely to have any guarantees. The Patriots love to kick the tires on veterans, and this is nothing more than that.
Signing Tebow doesn’t mean that he’s a lock to make the roster. Rapoport reported that Tebow will play quarterback in New England, but it’s hard to imagine him passing Ryan Mallett on the depth chart. Third stringer Mike Kafka was released on Monday.
Tebow, like a lot of No. 3 quarterbacks in the league, has to prove his worthiness in limited practice snaps. Unlike most No. 3 quarterbacks in the league, he could potentially help on special teams and the occasional trick play. 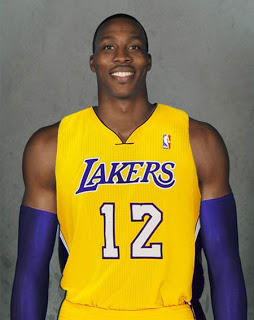 I have wrestled with this for quite sometime now. Should the Lakers trade Andrew Bynum for Dwight Howard? For some it seemed to be a no-brainer, but every since the announcement from Dwight(last year) that he wanted to be traded I have not been so gung ho to see this happen.

1. My first problem is even with a torn meniscus in 2009, Andrew Bynum played decently enough to help the Lakers defeat the Magic with Howard in the Finals.

2. Next problem is contrary to what most think, Andrew Bynum is better than Howard definitely on the offensive end, even though I have to admit that what makes Dwight great is he plays hard on both ends on the floor.

3. Dwight Howard DOES NOT WANT TO BE A LAKER. I don’t want anyone playing on the Lakers who do not want to be there.

At first it was hard for me to believe Stephen A Smith when he said that D12 reason for not coming to the Lakers is because he doesn’t want to have to follow in the great tradition that LA has for centers. You the likes of Mikan, Chamberlin, Oneal etc, he want to create his own legacy somewhere such as Brooklyn. That’s COWARDLY to me. Why? Because in Orlando you have already placed yourself in the record books. Sure to be a first ballot hall of fame player. So why are you afraid?
Then he says he wants to be the go to guy at the end of the games..but you shoot 50% at the stripe…seriously…every big man needs a 2 guard that can play the game…uh and he would have a 5time champion!

Now let’s talk about all the back & forth. It has taken him NO WHERE! The guy alledging he was ”blackmailed” by the Magic into signing his extension. SMH. So being told that the Magic will take the Laker deal is blackmail now…oh Dwight how the mighty has fallen in the eyes of sports fans. No wonder the Nets moved on.

Nonetheless IF this deal goes down, I will be forced to root for him, simply because he wearing that Purple & Gold, but this situation is ridiculous.

Where do you go from the top? You go over the top. The #KobeSystem: Success for the Successful is Kobe’s winning, results-oriented philosophy on how to adapt to succeed. You’re Welcome.

Posted by mashdani38 on January 4, 2012 in Sports, Uncategorized

Kobe Bryant had something to prove last night as he stepped on the floor at Staples Center, after his poor shooting performance in Denver that resulted in him going 6-28, that he knows how to play this game: His Way! After all the criticism he took for not getting the ball inside more when his shot was obviously off, Bryant responding by taking the first shot of the game, and making it. Kobe would actually finish the game shooting 50% on 14-29 with 37pts/8rbs/6asst. The pain in that right wrist is still evident though on a lot of trips down the floor, where you can see Bryant wincing from the pain or simply rotating it continually. As a Laker fan we get so spoiled, because Kobe never complains about his injury, he just shows up for work day in and day out. I asked myself why his legacy on the court is marred with success that’s usually played through injury? But I guess everyone has their legacy that they will live. How much greater when people realize that he not only played when sick (flu) but with torn ligaments, bad knees, & ankles on his way to his 6th championship. END_OF_DOCUMENT_TOKEN_TO_BE_REPLACED

3 time Wnba champion, Swin Cash, has been traded to the Chicago Sky, along with LeCoe Willingham for Chicago’s #2 pick in the 2012 Wnba draft. I would consider this to be a good trade for both teams. Chicago has youth on it’s team, what it’s lacking is experience, along with a championship mentality. As much as I love Sylvia Fowles (now that she is not at LSU going against my Lady Vols) she hasn’t won anything. Although her hunger is there, you need a player who has been there to help lead the way, and Swin Cash is that perfect piece. END_OF_DOCUMENT_TOKEN_TO_BE_REPLACED

Lebron James has taken the next big step in his life, and asked his high school sweetheart Savannah Brinson to be his wife. The supestar basketball player proposed New Years Eve at a Miami nightclub where he was celebrating his birthday. The couple has 2 children, Lebron James Jr (7) and Bryce (3). I know I give Lebron a hard time, but that’s only on the court…(hey I’m a laker fan..lol) but off the court he scores big to me for this move! Congratulations to the happy couple!

The Lakers took to the court Saturday afternoon to take on the high powered offense of the Denver Nuggets, and unlike the previous 4 games, this time they had their anchor in the middle: ANDREW BYNUM. And oh what an impact the InCredible Bynum made scoring 29pts/13rbs/2blks. It’s funny because the first question that came from analysts after seeing Bynum’s season debut was, “do Laker fans still want to trade Bynum?” END_OF_DOCUMENT_TOKEN_TO_BE_REPLACED

If you are basketball fan, then you have probably heard the news that UT Lady Vols coach Pat Summitt has been diagnosed with Dementia (early onset Alzheimers). But as we all know Pat Summitt, once she knows who the opponent is, is one of the best at divising a plan to defeat the opposition. This is not different at all. But her being the great woman she is, and going public with the news, put things in perspective for not only her fans around the world, but especially those she has impacted on a personal note, mainly players. Chamique Holdsclaw, who is one of the most decorated Lady Vols to come through Thompson Boiling Arena took time out to let the coach know exactly what she meant to her, and all the players, managers, staff etc who has come through the program. Check it out. END_OF_DOCUMENT_TOKEN_TO_BE_REPLACED

Last night TNT had 2 great games on. With the defending champs, Dallas Mavericks, being defeated by the Oklahoma City Thunder with a buzzer beater by Kevin Durant. Because this is a post about the Laker game, I’ll just let you take a look for yourself at how KD made sure Vince Carter understood that although he idolized him growing up, this was his house. END_OF_DOCUMENT_TOKEN_TO_BE_REPLACED